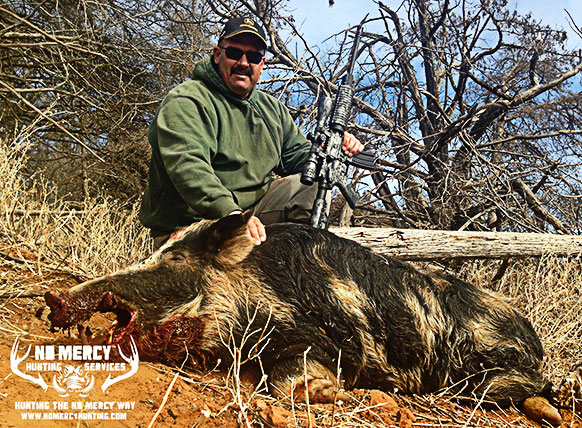 Domestic swine are big, ugly and smart.  Feral hogs are all of that, plus mean and aggressive.  Insert some Russian Boar DNA and you get what is referred to as “The poor man’s grizzly.”

Call him “Razorback,” ‘Swamper” or just plain feral, they’re mean. In my opinion, hunting these feral mixed blood throwbacks to the metazoan era is about as much fun as you can have fully clothed.  I don’t know why, but hunting big, ugly, mean hogs gets my blood up.  I’ve gone after them with modern and obsolete rifles and handguns of various large calibers.  I don’t hunt them just for the excitement, I hunt them because most of them make good groceries.  But yeah, it’s about the adrenaline too. So when my friend Jim asked me if I wanted to hunt wild hogs with him in Oklahoma last February, I was packed and ready a week before our departure date.

We could use the meat, plus I was also interested in hunting them from a stand, overlooking a timed feeder, which I’ve never done before. I’m told stand hunting is different in that when after wild pigs, it gives the hunter the opportunity to appraise the pigs available before dropping the hammer on one. Trust me on this, when you go one-on-one with these big nasty rascals in the pucker brush, you don’t have time to evaluate their trophy potential.  You learn to shoot quick or stay out of the way.  I’ve been told shooting pigs from a stand is a long way from a slam dunk however. Feral pigs are school-house smart and spooky as any 10-point whitetail buck.  They know where the corn is, where the blind is and they know when someone is in that blind.

We hunted by Anadarko, Okla., courtesy of No Mercy Hunting Services, in a tangled mess of cedar breaks, brush-choked canyons and rolling hills.  The hogs were as spooky as GIs on night patrol in Afghanistan.  Plus they were ready to fight or run, which ever seemed like it would work best.Since I’d brought my BLR in 300 WSM and my 454 Casull revolver, I figured I was ready for the dance to start either way.

We covered more than 14 miles the first day and around five more miles on the second day.  I was able to shoot two hogs, both Russian cross sows that were uglier than homemade sin.  They were both shot by spot and stalk. The big one tried to run and didn’t make it.  That was day one. On day two…

Read the full article By BOB MEINECKE at codyenterprise.com 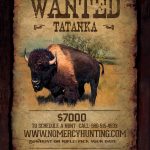 Keep up with current pictures, events, special pricing and other perks by following us.